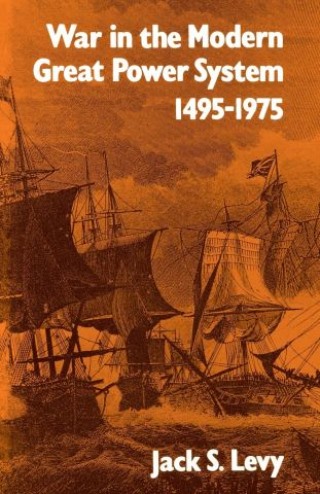 The apparently accelerating arms race between the United States and the Soviet Union and the precarious political conditions existing in many parts of the world have given rise to new anxiety about the possibility of military confrontation between the superpowers. Despite the fateful nature of the risk, we have little knowledge, as Jack S. Levy has pointed out, "of the conditions, processes, and events which might combine to generate such a calamity." No empirically confirmed theory of the causes of war exists, and the hypotheses—often contradictory—that have been proposed remain untested.

As a step toward the formulation of a theory of the causes of war that can be tested against historical experience, Levy has developed a unique data base that will serve as an invaluable resource for students of international conflict in coming years. War in the Modern Great Power System provides a much-needed perspective on the major wars of the past. In this thorough and systematic study, Levy carefully defines the Great Power concept and identifies the Great Powers and their international wars since the late fifteenth century. The resulting compilation of war data is unique because of its five-century span and its focus on a well-defined set of Great Powers.

Turning to a quantitative analysis of the characteristics, patterns, and trends in war, Levy demonstrates that although wars between the Great Powers have become increasingly serious in every respect but duration over the last five hundred years, their frequency has diminished. He rejects the popular view that the twentieth century has been the most warlike on record, and he demonstrates that it instead constitutes a return to the historical norm after the exceptionally peaceful nineteenth century. Applying his data to the question whether war is "contagious," he finds that the likelihood of war is indeed highest when another war is under way, but that this contagious effect disappears after the first war is over. Contrary to the popular "war-weariness" theory, he finds no evidence that war generates an aversion to subsequent war.

Jack S. Levy: Jack S. Levy, assistant professor of government at the University of Texas at Austin, has contributed studies of international war to International Studies Quarterly, American Journal of Political Science, and the Journal of Conflict Resolution.